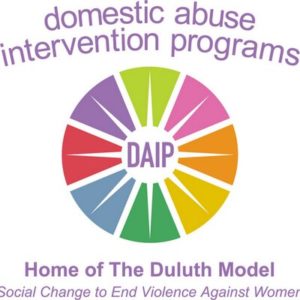 Class One. This class has fewer than ten participants, but we expect that the numbers will grow as the weeks pass because these are open-ended classes that continuously cycle for 27 week periods. After a brief breathing/relaxation activity, we ask men to describe the incident that brought them to the class. In response we hear an awkward mix of blaming and self disclosure, giving a tiny glimpse of the suffering their families have lived with. Most men are reluctant to self-reflect or admit to violence. In decades past, we challenged and questioned the men, trying to get them to “own up to their violence.”

We still hope men will “own up,” but we’ve learned there are more effective ways to engage them than hammering away at their defensiveness. Over the first hour and half of their time with us, we invite them to talk more openly about their lives, encouraging them to focus on their own behavior, upbringing, ideas about being a man, a partner and a family member. We listen with compassion. As facilitators, our main role at this point is to listen, reflect, and encourage, but not collude. It’s so reassuring to have a woman co-facilitator who can filter this discussion through her experience as a victim advocate. It reminds me that much as I care about what the men say and do, the bigger picture is the lives and safety of women and families.

Some themes came out of our first class that we plan to follow up on as we build trust. One man talked about his need to “swallow his pride” when he realized his way of life was not only hurting everyone around him, but hurting himself as well. He saw that he needed to make big changes. Even though it was shameful, embarrassing to him and cost him a lot, the benefits of making that change are so much greater. “Swallowing your pride” is something we might explore in depth. What does it mean to you, what do we gain, what do other men think of it? Does it make me stronger? Weaker?  More of a man? Is it humbling? Is it part of a spiritual quest?

Some men talked about how they were worried that their anger was impulsive. They felt out of control and they didn’t like it; it felt damaging. We didn’t question the old chestnut of “Isn’t this  an anger management program?” (no, it isn’t!) Instead, we examine the more interesting question of the extent to which anger is actually impulsive. In what ways are we actually “out of control?” What do those feelings tell us about our underlying beliefs about being a man? Can we change them? Can we set ourselves free? How might we do that?

Class Two. Another small group, with different men. As in the first class, when we ask ”What did you do in the incident that brought you to the program?” all participants chose to talk about their partners’ behavior. “The woman is the problem or offender.” “Being sent to this program is an injustice.”

We listened, didn’t interrupt, and gently steered them back to their own behavior. We introduced a simple scale on the chalk board that shows a range of self responsibility called the Men’s Change Scale. I used my own experience from when I separated from the mother of my children. When I first reluctantly saw a counselor, I believed my partner had the problems and I was just fine.

At that point I was at a ‘zero’ on the change scale. After a few weeks of work I realized I had a few problems I needed to work on, but she had more problems. If we were ever going to get back together she really needed to get her act together. I was now a ‘four’ on the scale. I finally got to an ‘eight’ after six months of work on myself when I understood that I had to work on myself no matter what she did.

To reach the end point of the scale – a ‘10’ –  I explained that I would keep doing this work for the rest of my life. I do it for myself and with other men, because we all need to do this work to be better partners, parents and community members. I asked the men in the group to consider where they are now on that scale. Where do they want to be? What helps them move along the scale? What holds them back? I mentioned what helps me move forward, what holds me back.

We didn’t ask the men to say where they are on the scale, just to consider whether they’re happy with where they’re at. This class is about helping them to move along the scale. We invite them to join us, to be a different kind of man, because so much of what we learned as men has not helped us be happy in relationships. Some men responded very positively to the scale, some not so much.

Some opened up a little about their struggles to be good partners – how they “want to deal with situations better,” and saying, “I know I have an anger issue.” This was after denying using violence in the opening round. It was an encouraging development.

Some men were very concerned that their partners had been abused by other men. They were struggling with their partner’s behavior that seemed to be caused by undealt with hurt from a former relationship. My co-facilitator and I believe that the men need help understanding how to deal more compassionately with their partner’s hurt and anger from the past. This is a theme we will develop in future sessions.

We had a short discussion about how to demonstrate non-violent behavior with your partner and family. At the end of the session, the men said that they appreciated me sharing my own experience while I laid out the the Men’s Change Scale. After the class, we received constructive feedback from a DAIP staff member who observed the session. The debrief helps us decide how to move forward. More trust-building![/vc_column_text][/vc_column][vc_column width=”1/3″ css=”.vc_custom_1542313635327{margin-left: 15px !important;}”][vc_widget_sidebar sidebar_id=”blogsidebar”][/vc_column][/vc_row][vc_row full_width=”stretch_row” content_placement=”bottom” css=”.vc_custom_1542207024716{background-color: #fafafa !important;background-position: 0 0 !important;background-repeat: no-repeat !important;}” wpex_bg_position=”left” min_height=”350px”][vc_column][vc_column_text css_animation=”fadeIn” responsive_text=”true” font_family=”Lato”]