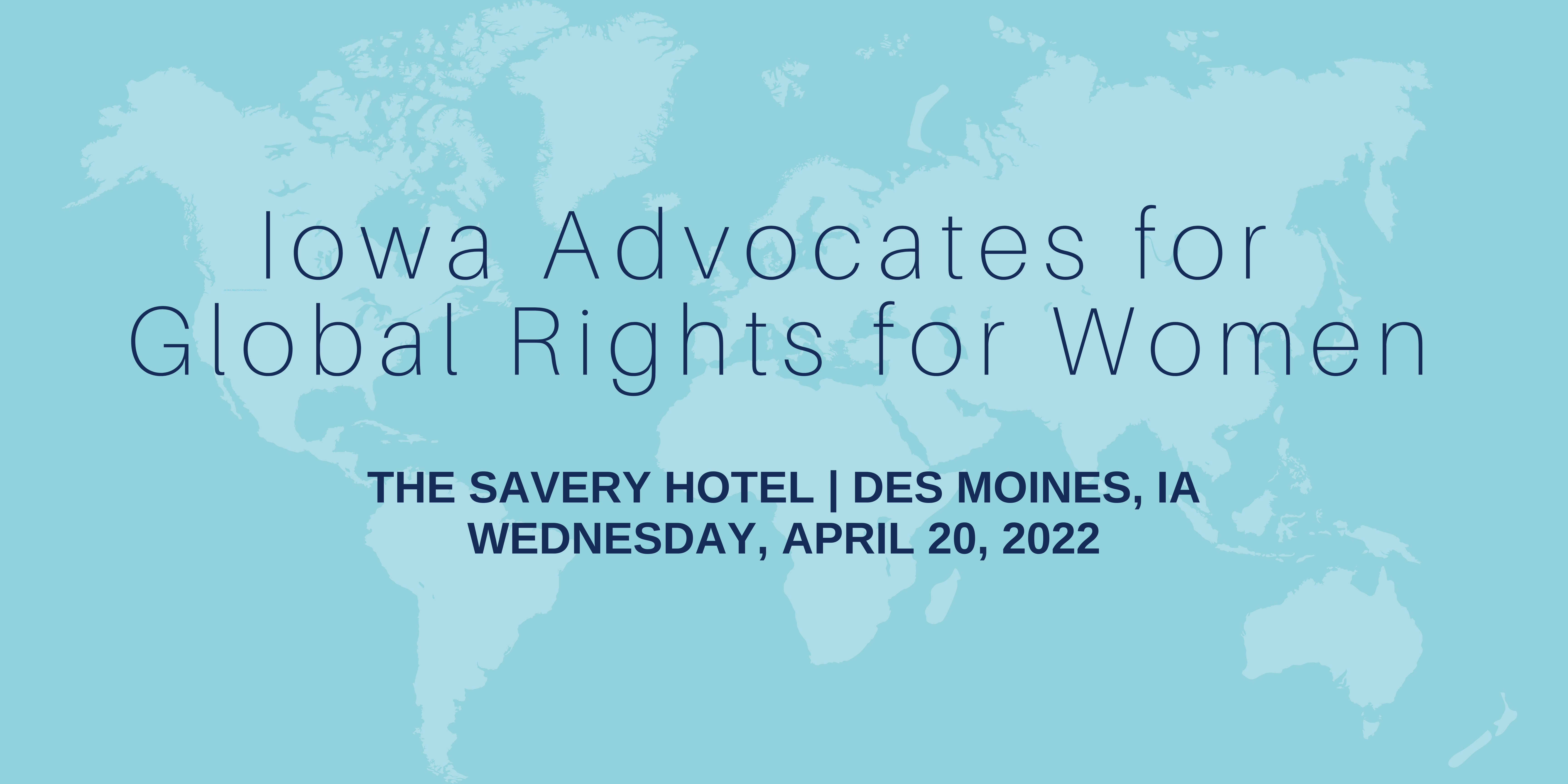 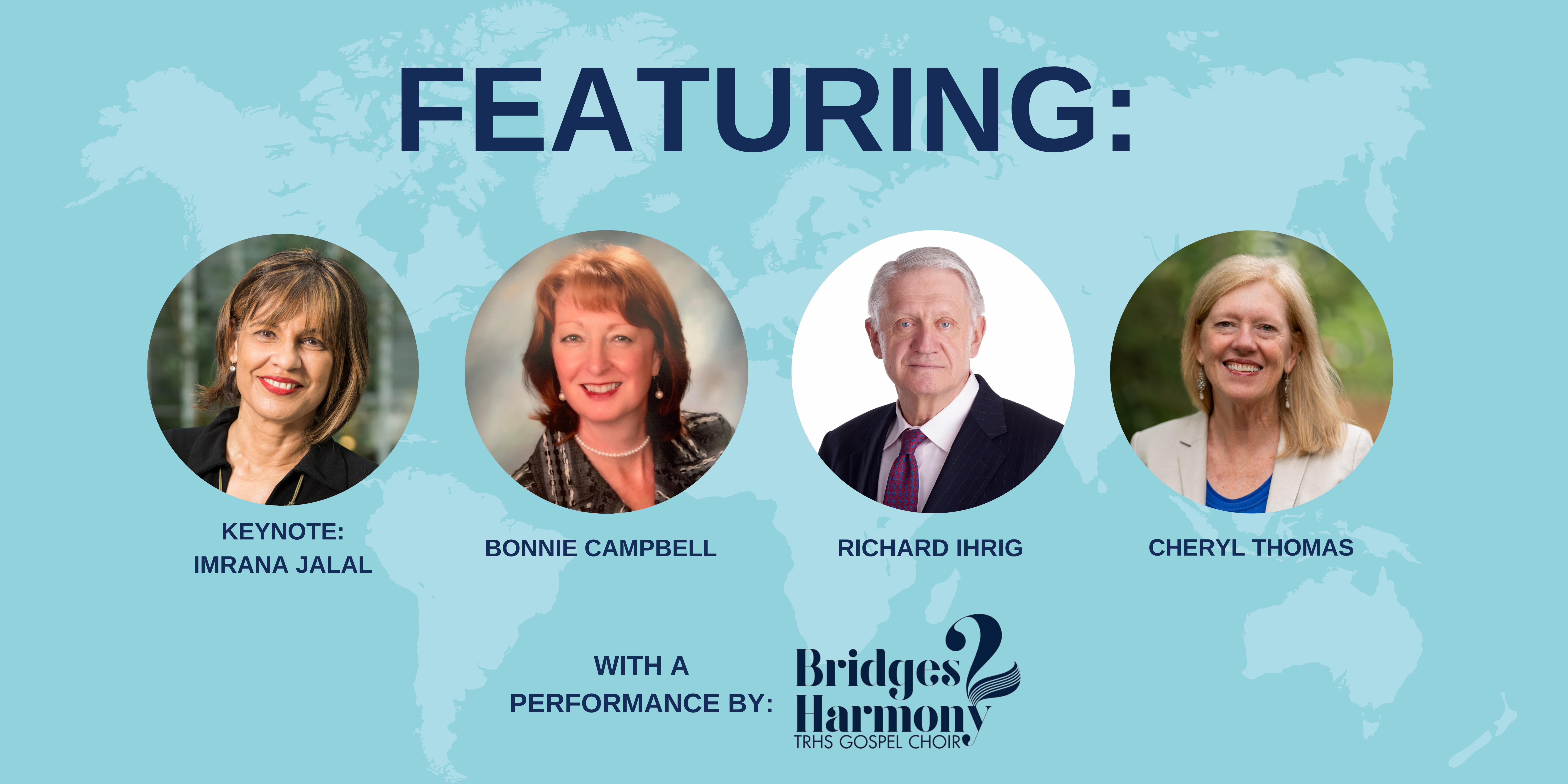 Purchase individual tickets or a full table for the Iowa Advocates for Global Rights for Women Fundraiser. Your individual support at any level allows the work to continue towards the future for women and girls that is free from violence.

A corporate or law firm sponsorship of the Iowa Advocates for Global Rights for Women Fundraiser not only provides exceptional promotional benefits, it also allows the work to continue that results in worldwide change for women and girls.

Dinner and Program start at 5:00 PM (Kosher for Passover meals available upon request by April 6).

This special, in-person fundraiser will be hosted by the Iowa Advocates in support of Global Rights for Women, the Minneapolis-based nonprofit dedicated to eliminating violence against women and girls.

Global Rights for Women is the leading voice in this global movement to end violence against women and girls, and builds local and international partnerships that advance laws, values, and practices to ensure all women and girls live free from violence. Read more about us here.

Join us to hear from incredible women’s human rights leaders:

Imrana Jalal: Imrana is a groundbreaking human rights attorney from Fiji and a leader of women’s rights across South Asia. Her work includes serving as the founding member of the Fiji Women’s Rights Movement, a former Human Rights Advisor for the United Nations Development Program, and is now Chair of the Inspection Panel for the World Bank. In 2006, Imrana became a national name after publicly standing up to Fiji’s historically oppressive Military regime. In 2008, she served as Chair of the United Nations Expert Group Meeting in Vienna that developed the first global model legislation on violence against women. Imrana is now a Board Member for Global Rights for Women.

Richard Ihrig: Richard is a Global Rights for Women Founder and Board Member from 2015 – 2020. Richard graduated from the University of Minnesota Law School and was a partner at the Minneapolis firm of Lindquist & Vennum for 31 years.

Cheryl Thomas: Cheryl is the founder and Executive Director of Global Rights for Women. Since 1993, Cheryl has worked with partners around the world to promote women’s human rights and achieve effective legal reform to end violence against women. She has participated in the drafting of new laws on violence against women and girls in over 20 countries and trained legal professionals to enforce these laws. Cheryl has worked closely with the United Nations to develop model standards on legal reform on violence against women. In 2011, she was recognized by Newsweek magazine as one of 150 “Women Who Shake the World.” Cheryl graduated from Indianola High School, Simpson College, and University of Minnesota Law School.

Bonnie Campbell: Bonnie served with distinction for four years as Iowa Attorney General and then joined the Clinton Administration as one of its key officials on crime and gender-equity issues. Selected by Clinton in 1995 to head the Justice Department’s newly-created Office on Violence Against Women, Campbell emerged as a national leader for her work to bring victim-rights reform to the country’s criminal justice system. Campbell’s effectiveness led Time magazine in 1997 to name her one of the 25 most influential people in America. Praising her for bringing “rock-solid credibility” to her job, Time called Campbell the “force behind a grass-roots shift in the way Americans view the victims–and perhaps more important, the perpetrators–of crimes against women.” As director of the Justice Department’s Office on Violence Against Women, Campbell oversaw a $1.6 billion program to provide resources to communities for training judges, prosecutors, and police and to provide services and shelter to victims.

In 1996, Campbell was chosen to serve on the President’s Interagency Council on Women, chaired by First Lady Hillary Rodham Clinton. She also headed the Justice Department’s Working Group on Trafficking and was instrumental in the creation of a U.S. treaty with Italy on ending trafficking in women and girls. She subsequently was appointed by Secretary of State Madeleine Albright to represent the United States in international negotiations on the creation of an International Criminal Court. She was a member of the U.S. Delegation to the United Nations’ Fourth World Conference on Women held in Beijing in 1995 and has been a leading spokesperson on international human rights issues ever since. Campbell was elected Attorney General of Iowa in 1990 and served through 1994. She is the only woman to have held that office in her state. She strengthened Iowa’s domestic violence laws, increased funding for victim compensation programs and shelters, and wrote what became a model statute on anti-stalking for states around the country. Campbell’s legal practice focuses on providing crisis management counseling to businesses confronted with highly visible legal matters as they attempt to deal with the public, the media, and an array of government agencies. Campbell speaks regularly on the subjects of domestic violence, victims rights, human rights, and international trafficking in human beings. She has been featured in articles by People magazine, Time, The National Journal, US News and World Report, and numerous newspapers and has been a frequent guest on television and radio news and talk shows. Originally from Upstate New York, Campbell earned her bachelor’s degree, summa cum laude, and law degree from Drake University.

Thank You to Our Event Sponsors 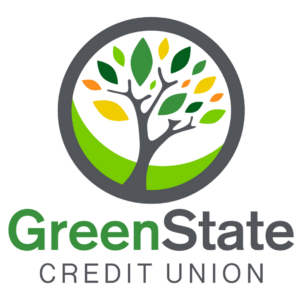 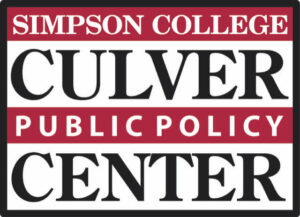 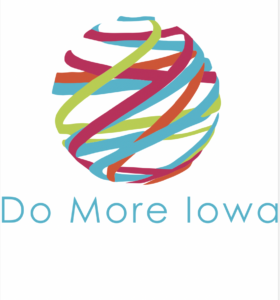 Thank You to our 2022 Match Pool Contributors

Global Rights for Women is exempt from federal income taxation pursuant to Section 501(c)(3), EIN 47-1861069. Your contribution is tax-deductible to the extent allowed by law. No goods or services were provided in exchange for this contribution.

Copyright Global Rights For Women. 2022 - All Rights Reserved
Back To Top
×