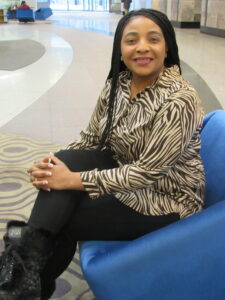 By Patricia Cumbie, Communications Manager
May 5, 2021

Comfort Dondo moved to Minnesota from Zimbabwe in 2004, and in 2012 sought shelter from an abusive relationship. She found the shelter experience very challenging because what she needed most from the system was not available to her.

Fortunately for women in both Minnesota and Africa, Dondo decided to do something about it. As a mother, social worker and public policy advocate, she has worked tirelessly to fill the gaps in both cultural awareness and available services for immigrant women experiencing domestic and sexual violence.

In 2017, she founded Phumulani, which means “to rest,” and was created to meet the needs of African immigrant families who are underserved by predominantly white, mainstream organizations.  Dondo especially set out to change the lack of African women in leadership.

Through Phumulani, women can gain assistance in an environment that feels like home—including culturally-specific foods, social rituals, and personal care products that help women feel in control in an overwhelming situation.

“Most African immigrants in Minnesota come from some kind of war zone. A lot have PTSD, there’s a lot of mistrust.”  Women are often dealing with domestic violence linked to multiple oppressions of colonialism, systemic racism and sexism.  “A lot of women are living in isolation and that adds on to the shame brought up about violence.”  Dondo said that for these reasons, it can be hard for African women to open up about violence they may be facing.

Dondo received a Bush Foundation grant in 2019 to lead tea ceremonies and healing circles that bring immigrant women together for mutual support, addressing the silence, guilt and shame around domestic violence in the community.  With Covid-19 these are now held virtually.  “Putting immigrant women in mainstream support groups didn’t work.  Women feel safer with women who they can relate to, who look like them, and the tea ceremonies are very familiar.”

Dondo’s personal mantra is about breaking the silence, and it’s this powerful concept combined with healing circles that has already changed lives.  More and more women are gaining confidence to speak and be leaders in facilitating the healing circles.

She’s also clear that domestic violence in any community affects everyone—from families overseas to children interacting on the playground locally. “This is everyone’s issue.”  Like everyone involved in ending domestic and sexual violence around the world, be they donors or advocates, passionate people who support the work make a big difference.

As part of her work, Dondo also reached out to Global Rights for Women to share what’s going on in her community, as well as hoping to change repressive laws overseas. “I keep coming back to Global Rights for Women because of how global our organization is by virtue of the women in it being from across the globe. I hope for continued collaborative work that empowers us to do the work we need to do.”