Depp-Heard verdict is a blow to all women 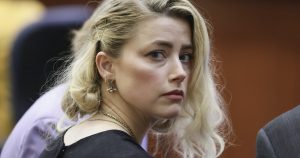 Actor Amber Heard waits before the verdict was read at the Fairfax County Circuit Courthouse in Fairfax, Va., June 1.

The verdict in Johnny Depp’s defamation trial against Amber Heard is a devastating blow to victims of violence and all women. Amber Heard has lost in one of the most publicized trials concerning domestic abuse that this country has ever seen. Throughout the trial, she was not only disbelieved and viciously degraded, his fans threatened to kill her as she defended herself against this powerful man and his allies.

Her supposed offense? Her truth-telling about his violence. The jury’s finding against abundant independent evidence of his abuse – that she not only lied, but did so with malice – is outrageous.  As Stanford Professor Michele Dauber said, “There is a glee, a kind of delight, that is being taken in watching her be humiliated.” How sickenly common this is for women.

The message to us is loud and clear – and depressingly ancient. Be quiet. Do not challenge the men who abuse you, especially powerful ones. The institutional forces of patriarchy that favor men – money, lawyers, connections, fame – will crush you.

The barriers to justice for victims of gender-based violence are tremendous, and the Johnny Depp/Amber Heard case resonates as a textbook example of systemically entrenched inequality.  From the moment a woman reaches out to speak, leave, or end abuse, our social and legal systems are set up to discourage and silence her. How many women being assaulted by their partners watched this trial and concluded that they will be labeled liars if they come forward? How many will endure more abuse because they are afraid of being shamed and ostracized by family and friends?

Gender-based violence against women is a global human rights pandemic. It endures over centuries and across borders. It touches every one of our lives. Abusers across the world continue to enjoy impunity and institutional support for their violent control of women and girls.

The academic researcher Alessandra Gribaldo spent a year in Italian courtrooms, documenting how domestic violence cases are treated.  What she found was the women were the “unexpected subjects” on trial for their behavior and character in ways that male perpetrators were not.  Victim-blaming is alive and well in 2022.

Bottom line: every society in our entire world has difficulty believing women. In the courtroom, the old “fatal attraction” trope about the unstable, deceitful woman was played out and accepted by the jury and legions of others watching.   Amber didn’t present as a perfect victim,  and this proved justification for Depp’s violent, threatening behavior. Male violence is so normalized that many have difficulty even seeing it or recognizing it as a problem.

So often I hear “men get abused too,” and it’s clear that Johnny Depp will become a poster-child for men’s rights.  Let’s be real here.  The overwhelming majority of domestic violence is perpetrated by men on women.  In a recent study in Brazil, 70% of men who experienced assault were attacked on the street, and 70% of women who experienced assault were attacked in their homes.  Home is the most dangerous place for women.

Research shows that 1 in 3 women will experience gender-based violence in her lifetime, and there is no doubt, that number is underreported.

Our communities have created endless reasons for women not to report violence.

The headline on Amber Heard’s 2018 opinion piece in the Washington Post, which prompted Johnny Depp’s lawsuit, was “I spoke up against sexual violence — and faced our culture’s wrath. That has to change.”

That statement is even more true today.  The closing words of her opinion piece are still right on target : “We can work together to demand changes to laws and rules and social norms — and to right the imbalances that have shaped our lives.”

Originally written for the Star Tribune – read the article here.