Global Rights for Women in Kazakhstan

How We Work, Eastern Europe

Global Rights for Women was invited to present at conferences in Astana, Kazakhstan and Pristina, Kosovo in November 2018 about our work on Coordinated Community Response to Domestic Violence. The Kazakhstan conference was hosted by a partnership between The National Commission for Women, The United Nations Populations Fund, and the Organization for Security and Co-operation in Europe. The Kosovo Conference was hosted by The Republic of Kosovo in partnership with Kosovo Women’s Network, UN Women, UNICEF, OSCE, the European Union Rule of Law Mission in Kosovo, the American Embassy, and Kosovo Force.

Several leaders in gender-based violence work across Eastern Europe have become enthusiastic about GRW’s application of the Institutional Assessment process. Institutional Assessment centralizes the experiences of victims and survivors in system responses and results in holding offenders more accountable for their violence. This process, which is built on a human rights analysis, has resulted new laws, policies and procedures to protect women and girls.

It was COLD in Astana, Kazakhstan, but the conference of 200 crisis center workers was full of warm energy! 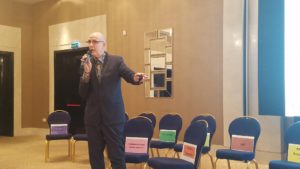 I began by arranging 13 chairs at the front of the room. Each chair was labelled to illustrate a step that a domestic violence case takes as it moves through the criminal justice system. Gaps between the chairs represented how victims of domestic violence often fall through the cracks as their cases are processed by different agencies, each with its own purpose. Victims may feel disillusioned and withdraw from participating in the criminal justice process. Frustrated criminal justice workers may blame victims for crimes committed by the perpetrator, or for their lack of cooperation. Domestic violence  perpetrators exploit the gaps in the system to avoid responsibility. Through the Institutional Assessment process, GRW brings together the experiences of survivors, front line workers, and experts to make intervention more seamless and victim-centered. We gather input from those who know the system best. This ‘bottom up’ process engages all parties and builds trust. The chairs exercise helps people not only identify the gaps, but how to improve the process.

In Kazakhstan, I worked with local and national leaders who recognize the gaps and want to fix them. Kazakhstan already has some of the pieces in place to create a more effective response to domestic violence. One example we saw firsthand is a well developed system of crisis centers for victims. We visited a crisis center in the capital city Astana, one of 147 throughout the country. At the same time, we observed that there is little community-based accountability for domestic violence offenders, with few going to jail for even the most serious offenses.

In rainy Kosovo, a small country with complex historical tensions about autonomy and ethnicity, I had another opportunity to present on Institutional Assessment. This conference hosted a wider mix of participants – front line practitioners, policy, training, and administrative leaders from Kosovo and neighboring countries.

Here I focused on the four theories of domestic violence: Individual pathology, relationship dysfunction, the cycle of violence, and theory of dominance and entitlement. Participants were interested in learning about the theories because they are used to hearing that violence is caused by psychological problems, or a communication deficit. They seemed to appreciate that all the theories have value, but began to recognize that when there’s a power difference between the victim and offender, we have to address it to  effectively address the violence. The theory of dominance and entitlement is the only approach that addresses the power imbalance.

One young women knew that I work with men who abuse, and wondered whether men blamed their childhood or poor communication. We had a brief discussion about how a strong and consistent response by the criminal justice system is essential to both victims and offenders. No matter what men thought when they first join a rehabilitation program, most will eventually take some responsibility for their violence. But even if they don’t, the lack of responsibility is valuable information for his partner. It can help her make decisions for her future that will keep her safer.

Participating in these conferences gives us opportunities to present ideas for system change that take into account where various countries are in the process of responding to domestic violence. Global Rights for Women has a lot to offer and, when the resources permit, we can work with partners around the world to close the gaps for both victims and offenders.