How We Work, Asia, Featured 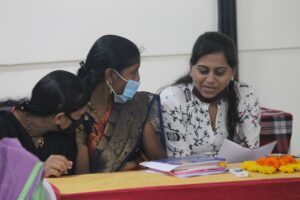 On a recent evening in Maharashtra, India, a group of women from the community met to envision new solutions to a very old problem: gender based violence. The goal was to consider ways to stop this deep-rooted cultural norm from keeping women from reaching their full potential. Global Rights for Women and Global Women Fresh have joined forces with Fresh Express in India to build their capacity to identify and assist women who are victims of violence.

The issue has taken on particular urgency during COVID-19 with the surge in domestic and sexual violence globally during lockdown.  In many countries it has risen as much as 20-30%, and the resulting isolation and abuse impacts everything from personal safety to economic solvency. Studies in India show 45% of Indian women have been physically abused by male partners.

During the meeting co-facilitated by Cheryl Thomas and Laura Wilson of Global Rights for Women (United States), Nina Patil of Fresh Express, and Poonam Kathuria from SWATI: Society for Women’s Action and Training Initiatives (India), the participants discussed domestic abuse using the Power and Control Wheel as a tool to spark conversation.  The Power and Control Wheel, developed in Duluth, Minnesota, reflects interviews with women about their experiences of domestic violence, and it is now used and adapted all over the world.

Thanks to excellent interpretation–from English to Hindi and Marathi and back again–there was a rhythmic cadence from the multiple languages, as well as a growing sense of empowerment in breaking silence about realities that keep women subjugated and controlled by their intimate partners.

They discussed, for example, a man who lost his job because of COVID-19. He became even more controlling, monitoring his employed wife’s whereabouts with suspicion and taking her salary from her when she was paid. Participants also discussed how there is very little joint ownership of homes in India because traditionally the husband or his family holds the property.  Women have no legal claim to the houses they are living in, and if there is an abusive situation she is the one forced to leave. Additionally, families may give priority to educating boys, rationalizing that girls will “get married and go away.”

All of these disparities–from taking a woman’s earnings, to lack of ownership and education–were identified by participants as barriers to a woman’s independence and ability to live free from violence. “We need equality in our relationships,” said one woman to resounding applause.  Another stressed the need for safety planning for women in their community.

Poonam Kathuria from SWATI in Ahmedabad, pointed out that the laws of India are clear that domestic violence is a crime, yet there is little support for enforcing them. That’s why women need a social support system, like those being formed by employers like Fresh Express, in partnership with Global Rights for Women and Global Women Fresh, to support survivors and share information about their human right to be free from violence.

The women also found the safety planning to be incredibly helpful. Based up on the success of this first workshop, future sessions to support more women around the world are now in the works.

Update 2/23/21:  Cheryl Thomas of Global Rights for Women and Nina Patil of Fresh Express, India talk about the women’s support groups and their impact on Beanstalk.Global’s podcast.

Patricia Cumbie is the communications manager for Global Rights for Women. This post was also published in collaboration with Global Women Fresh.