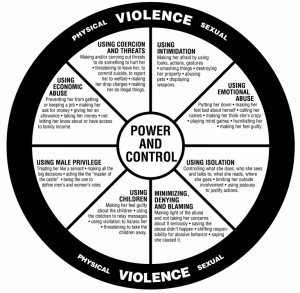 For 20 years, Scott Miller has listened to the excuses and justifications of domestic violence perpetrators. His job, as executive director of the Domestic Abuse Intervention Program in Duluth Minnesota, is to convince them that equality and non-violence is a better path.

The shift takes time. For the men Miller works with, unlearning a lifetime of gender bias and male entitlement and superiority is a journey that often begins with being court-ordered to attend classes after criminal charges.

Violence is a learned behavior, often reinforced by cultural norms and family dynamics. Men who abuse seek power and control over their partners to elevate their status and force desired behavior. It can be threatening and violent behavior, but also emotional or sexual.

As a teaching tool, Miller uses the Power and Control Wheel, a graphic that shows how abuse manifests itself. The Wheel was developed in 1984 by Ellen Pence, a Minnesota battered women’s advocate, who  incorporated feedback from more than 200 women who have experienced abuse. The Power and Control Wheel is used world-wide and has been translated into 80 languages.

In addition to working with men on behavior change, Miller also consults with courts, prosecutors, law enforcement, social workers, child protective services, probation officers and other entities.  His goal is to ultimately restore victim safety and hold abusers accountable for their actions. It is a goal shared by Global Rights for Women and its direct service program Pathways for Family Peace, a men’s behavior change program.

One of the challenges for law enforcement and the justice system is that women often renege on their charges of abuse. Miller points out that it all ties back to power and control. Once the police leave, a woman is again back in the sphere of the man who threatens her with harm if she reiterates her claims. Miller’s training helps police and prosecutors put measures in place to address survivor needs for safety. He also advocates coordination between justice, law enforcement and social entities for more effective intervention.

Miller’s mission has taken him around the world and gained him widespread acclaim. In 2014, his organization won the World Future Council’s Future Policy Award which ”celebrate policies that create better living conditions for current and future generations.”  By highlighting the world’s best solutions to the most pressing global challenges, the Council encourages policymakers around the world to adapt and implement them.

To sum up, Miller’s organization promotes “non-violence and peace: Every step we take, every interaction we have with others, is an opportunity to advance non-violence, continually working toward and building a culture and a future of peace.”