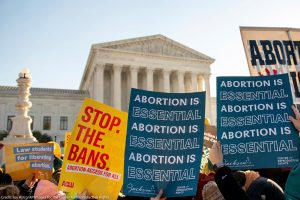 Roe v. Wade was a landmark case for abortion rights. Because of this case, legalized abortion became far more common, and safe abortions were performed nationwide. In 1970, Jane Roe (an alias to protect the plaintiff’s identity), filed a lawsuit against Henry Wade, the district attorney of Dallas County, Texas. The lawsuit challenged a law in Texas that made abortion illegal unless authorized by a doctor in order to save a women’s life. Roe argued in the suit that these state laws violated constitutional law and that her right to privacy was protected by the First, Fourth, Fifth, Ninth, and Fourteenth Amendments. In 1973, the case of Roe v. Wade passed. The Supreme Court determined that abortion does in fact fall under a person’s right to privacy. While giving his majority opinion in Roe v. Wade, Justice Harry Blackmun stated that “the barriers to a decent life are enormous when there is an unwanted pregnancy.” However, Roe v. Wade was not the end-all be-all for regulating abortions.

Throughout the years, the topic of abortion has been highly debated. In 2008, the California Supreme Court ruled that pregnancy resulting from rape represents a form of great bodily harm. Recently, though, the right to legalized abortion has been seriously threatened, particularly in Southern states. Texas recently passed a law where abortion becomes illegal after a heartbeat is detected. Missouri punishes out of state abortions by permitting a lawsuit against anyone that gives drugs to induce abortion to a Missouri residents. In Oklahoma, abortions are banned under any and all circumstances, punishable by up to 10 years in prison. These southern states have threatened the right to abortion, and have severely affected women trying to recover from instances of sexual assault and rape.

After sexual assault, women must face the long and incredibly difficult process of healing, both physically and emotionally. An NPR article that discusses the repercussions of the 2021 Texas abortion law writes:

“Being unable to terminate [a] pregnancy will make recovering from an assault even harder… For survivors, that further strips away agency and choice after their sense of safety and control has already been violated… What [the abortion law is] doing is it’s further taking control and power away from the survivor right at the moment when they need that power and control over their own lives to begin healing.”

Having access to abortion allows women to heal from sexual assault. It relieves much worry and stress, and can put the woman in a mindset to begin emotionally healing. Studies show that after being sexual assaulted, many women disassociate from their bodies for long periods of time. This means that by the time a women realizes she is pregnant— between 6 weeks and up to the beginning of the second trimester—she may not even have access to an abortion. With their access to abortions at risk, women are being asked to put their mental health aside, even when studies demonstrate that “sexual violence predicts the development of PTSD more than any other trauma, including physical attacks or natural disasters.”

Furthermore, criminalizing women’s healthcare is another example of systemic gender-based violence. When certain laws, like the ones noted above, are signed into force, they accord ample opportunity to abusers so that they may enact greater control over their partners. Pregnancy is a method for abusers to maintain power over their victims. Not only have women become subject to the scrutiny of the government, but also the surveillance of those abusers that pose the greatest threat to their livelihoods.

Abortion laws infringe on women’s basic human rights and autonomy. For victims of sexual assault and rape, abortion laws prohibit a woman’s ability to recover. As advocates for women’s rights, it is our job to question why governments allow full recovery to victims of certain types of violence and not others. We are responsible for supporting the victim’s decisions about how they wish to heal, rather than dictating what they should do with their bodies after trauma. Despite the continued threat that new laws pose to abortion, we must remain optimistic in the fight for women’s human rights, and in doing so, uplift the voices of victims and survivors so that they can attain freedom and healing.

Madison Plemens-Schunk is a rising junior at the University of Minnesota and a 2022 Spring-Summer intern with Global Rights for Women.

Goodwin, Michele. “I Was Raped by My Father. an Abortion Saved My Life.” The New York Times. The New York Times, November 30, 2021. https://www.nytimes.com/2021/11/30/opinion/abortion-texas-mississippi-rape.html.

“Where We Stand.” National Alliance to End Sexual Violence.  https://endsexualviolence.org/where_we_stand/rape-exemptions-and-abortions