How We Work, Asia, Staff Voices 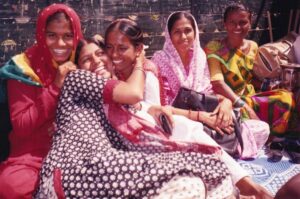 There is a recurring theme in our work at Global Rights for Women.  A passion for transformative change led by women and for women is everywhere.  This was so apparent to me in India this month.  Headlines read, “Fearless Delhi Women Inspire Nationwide Protest Movement” as grandmothers, teachers and students sit and sleep across a main road in India’s second largest city. They gather in outrage over an anti-Muslim immigration law passed by India’s parliament.

As in the Delhi protest, it is women who are leading a global movement to stem the tide of cruel and divisive dictates by authoritarians – that often hurt the most vulnerable. Women in Mexico City are also at the forefront protesting the brutal slayings of women and girls, sparked by the recent murder of 7-year-old Fatima Cecilia Aldrighett Anton.

I had the honor of meeting feminist leaders in Delhi, Jaipur and Ahmedabad. Jagori in Delhi serves victims of domestic and sexual violence, and has recently focused attention on making public spaces safer for women. Also in Delhi, Women on Wheels has created an innovative initiative that trains women to drive taxis, serving the need for safe transport for women and promoting economic independence for drivers. I asked one young woman about her choice to work as a driver and she spoke about mobility, “It is so important; it is what makes us free.”

NOMI, an anti-trafficking network, also focuses on economic empowerment to tackle women and girl’s vulnerability to violence and poverty. Partners in Law Development (PLD) works to end sexual assault and recently published a report monitoring the implementation of the 2013 anti-rape law.  WomenPowerConnect builds awareness about the devastating consequences of child marriage in India and works to coordinate the community response to sexual assault.

In Ahmedabad, SWATI established centers for violence victims in hospitals as a way to coordinate services for them. Vishakha, in Jaipur, promoted 10 centers in police stations that focus on safety and accountability for violence victims. These are relationships that GRW will continue to cultivate as all of us do our part to support women living free from gender-based violence.

It has been 25 years since the global movement to end violence against women surged at the Fourth World Conference on Women in China. In its aftermath, women-led social change groups proliferated around the world.  We cheered Hillary Clinton when she stood in front of thousands of women in Beijing in 1995 and declared “violence against women is a human rights abuse.” This was a long-awaited, thrilling new concept. It is much more than a concept now; it is a legal mandate in many countries.

Post-Beijing, we worked hard to achieve an unprecedented number of new laws to protect women’s right to be free from violence.  Now, young women leaders have a new passion and power behind their insistence that these rights be enforced. After all, unlike we old feminists who gathered in Beijing, these young women were born into the promise of the words, “Women’s rights are human rights.” We can expect growing demand for these rights. There is no going back.